The storms of life are beginning to take shape and I had no clue what was only hours away could be my final hours of living. We turned in about 9:00 in the evening, I was pumped for the hunt, and I fell asleep dreaming of big bulls and nice mule deer. I was sleeping nicely until I felt drops of water hitting my face, and wondered what the heck was going on. I felt my nose, and then reached up to feel the ceiling of the tent, which by the way were only inches from my face. I realized that the tent was caving in from 10 inches of snow that had fallen during the night. I woke Mark up and we both were shocked, we never checked what the weather would be, who would have thought of that! I got dressed in my wet jeans and checked outside the, tent poles we bent and some broken. When I got back into the tent, I then realized that all of our clothes and gear was soaked from the rain that changed to snow. I was not prepared for this. The snow continued to fall, normally I would have been thrilled, but not this time. 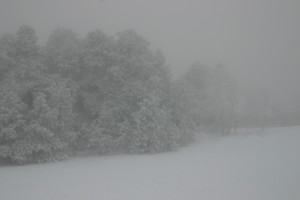 We had dilemma on our hands, so Mark and I started a fire to get warm and dry some of our clothes. As dawn finally arrived we talked about what we needed to do. He wanted to go get some supplies and let everyone know we were OK on top of the mountain. I stayed behind to watch our gear and gather firewood and kept a fire going. I stayed by our tent and hunted. The snow came down heavy; I was watching a game trail that had been used during the night. I could hear some shots down below me, and wondered what was happening. That’s when I heard the hoofs hitting some rocks close by, the fog was so thick, and I had no clue where these animals were. I was at the ready, and waited for several minutes to see if anything would come by. I went back and added wood to the fire and waited for Mark. It was afternoon, when Mark showed up. He brought in some supplies, food and beverages.

The wind and snow picked up, with fog as well. I have hunted in some pretty nasty stuff, but this took the cake. It was getting dark and I was starting to get cold and the shakes. I added wood to the fire and earlier in the afternoon, I built a lean to for Mark and myself. I couldn’t find any small pieces of wood, I kicked around in the snow for logs in which I could drag over to the lean to. I had a good pile stacked up. My sleeping bag was soaked and never dried out. I lay on the packed down snow, with wet clothes as my base, and covered up with my wet sleeping bag.. I tried going to sleep, but couldn’t because of the shivering and shaking. I was exhausted from being cold. I got as close as I could to the fire and it didn’t warm me at all. I told Mark that I was going to head down to the base camp below us. I had no clue how far away that was, but I was going down. I probably was 100 yards from the lean to, when something told me not to go any further. I went back and got Mark, and insisted that we go down together. The trip down was awful, we got lost, and the snow was blowing and became a blizzard. There was white out conditions, we didn’t know where we were going. We kept going along the side of the mountain. The snow was waist deep in some areas.

It seemed like hours we wandered, It was now 2:30 AM and I suggested to Mark that we fire three shots for distress warning. I did and no one responded, we did this a total of three times, and continued on. We fell over down trees that had sleet turn to ice, and then covered with the snow on top of them made them slick as grease. We fell often and hard. We took breaks and told each other that there was hope and we would be found constantly reassuring each other. I think Mark was as worried as I was about not surviving this hunt. Next week we will continue “Lost In A blizzard.”

“You can’t eat hope,’ the woman said. You can’t eat it, but it sustains you,’ the colonel replied.” ? Gabriel Garcí­a Márquez

This entry was posted in Life in general and tagged Dr Mike Brooks divorce coach and counselor, lost in a blizzard, the voice of hope. Bookmark the permalink.