Cell Phones and the Death of Relationships By Dr. Michael Brooks

Electronics and the Death of Relationships (1) By Dr. Michael Brooks

I went to a fast food restaurant and was having lunch with a friend of mine this past September, when suddenly several junior high kids rushed in and sat at the vacant tables surrounding my friend and I. The kids took out their cell phones from their backpacks and began to text each other in the restaurant. They were showing each other some of the pictures they had on their cell phones. The older boys went off to the side looking at some questionable material on their phones. I could tell by the way some of the boys had their hands cupped over their mouths while looking at the one boy’s cell phone while others were laughing and saying play it over again. The girls were in their group looking and sharing what they had on their phones. They were giggling and laughing while looking at their friend’s phones. I began to think, so much for sit down lunches and making new friends. 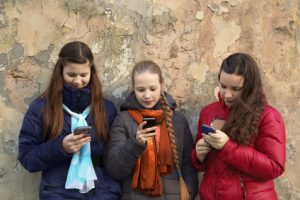 Can you believe that this seems to be a hot topic in today’s culture and around the world today? If you think about it, parents use electronics to babysit their kids; teens use them to connect with other teens, adults use them to kill time while waiting for work, waiting for the kids, or just to humor themselves.

Let’s look at the pre-era of cell phones, electronics, and family connections. I can remember when we sat around the dinner table and actually talked to each other. My parents would have classical music playing in the background (to give us culture, my mom would say) as we ate. I wasn’t crazy about that kind of music, but at least it was something to listen to. The four of us kids would share around the dinner table with our parents what our day was like at school, the kids we played with, things we wanted to do on the weekends. I have fond memories of many of those talks. My dad and mom would show interest in our daily lives. They’d help us with our homework; they’d sit and listen to us about the concerns we had. I know it was a different time, but I see the disconnect between parents and children, teachers, and students, even kids to kids in today’s family and society. I often wonder what’s going to happen to the families that allow electronics to control most of the communication within the family?

I have talked to Baby Boomers who feel that the 1950’s and 1960’s was the start of the decline of the family and the rise of the electronic revolution. For many of us, TV dinners were the rage. You watched TV together on TV trays; nobody talked to each other, all eyes were glued to the TV. It was a convenience for mom to put the frozen TV dinners into the oven for everyone and not prepare full-blown meals. We were captivated by Ed Sullivan, Mister Ed, I love Lucy, Howdy Doody. What used to be on early television in the 1940’s was news and other broadcasts. Then popular radio shows transitioned into television shows in the 1950’s. Then in the mid-1950’s is when some families started watching TV for the first time. In the 1960’s is when most American families had television sets in their homes. This is a short history lesson in the advancement of electronics and the decline of the family.

Today most people have a cell phone or I-pad that has replaced the TV, and it’s carried around in backpacks, on your person, in the classroom, at the dinner table, and the workplace.

Next week we will continue on with, how electronics are being abused in the family, at school, and with friends.

Do you feel frustrated about your families use of electronics? Have you given up trying to get the kids off their cell phones? Do you want to save your family from electronics but don’t know what your next steps are? Do you want to improve your communication with your family at the dinner table and need help in putting boundaries on all electronics? If you answered yes to any of these questions, you need to contact Dr. Mike and set up an appointment. Don’t allow hopelessness to destroy your relationship. Please call Dr. Mike at 303.880.9878. He can help you. He has helped several people going through tough times.