What Ever Happened to Martial Communication? 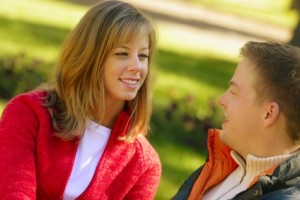 Keeping good communication with your spouse will keep your relationship strong!

As I sat across my desk looking into the eyes of a new client, she was having a difficult time using the word divorce in a sentence. Finally, I asked her why she wanted a divorce.  She became silent and just stared at her hands for several moments.  As she wrung her hands in despair, she spoke softly then looked at me with tears in her eyes and said “I want a divorce because my husband never talks to me; he avoids me when I walk into a room.”  She asked, “Do you know what it feels like when your spouse says nothing to you when he comes home from work?”

I asked her if she thought he would be willing to get marital counseling. “I don’t know. It’s probably too late to get help for us and I don’t want the hassle of making appointments and meeting with anyone.”  She went on to say, “I am fed up and too tired to continue down this road. It’s been this way for many years and he won’t change.”

I believe one of the major reasons people get divorced is the lack of communication. If you can’t express needs and concerns with your spouse then how do you solve problems in your marriage? Walking away is not always the answer and does not necessarily fix your marriage woes. Many couples, when fighting, give each other the silent treatment. They let their pride get in the way and try to win by not being the first person to speak. Friends, this is a major issue in many marriages. What is the point of not speaking to each other? It harbors resentment, bitterness, control, anger and possibly will start divorce proceedings. Is this the outcome you really want for you and your spouse?

Many couples don’t look at the consequences of walking away from their marriage. If you’re considering getting divorced, then sit down with someone who can help you figure out what you need to do. Make time to meet with your spouse too.  A major mistake most couples make is not talking out the issues that have forced you to decide if divorce is for you! Unresolved conflict carries into other relationships and the baggage from your past marriage will creep up in any other relationship you get involved in. I promise you that! I hear it all the time in my office. Some conversations are difficult but should not be avoided because they are uncomfortable. I tell my clients to put those feelings on the table and talk about them. If you don’t, they will come back to haunt you in the worst way.

I had a client who walked away from her marriage and never had any resolution to why she left the marriage.  She and her husband never talked about the issues that caused their break-up, in fact, they avoided them. When she got into another relationship, the same problems started to happen and she walked away from the guy she was seeing. That’s when she called me to talk over some of the unresolved issues she was encountering.

Her major issue was that when she argues she shuts down.  She hates conflict and avoids it at any cost. The men she had been involved with yelled when they argued and when they did she withdrew and would walk away. One of the tools we had to help her learn was not all conflict is bad, it’s just how is it handled in the first place. How many of you hate to fight and argue? Probably most of you. If you don’t know how to fight fair then learn how to debate in a mature way where facts are presented and discussed in an adult manner. If she had those tools she probably would have never filed for a divorce.

Most divorces don’t need to happen. Couples need to learn how to communicate better and sit down and resolve their problems. Talking out marital problems is critical in saving your relationship. Believe me it’s worth the effort in the long run!

Dr. Michael Brooks is the founder of Applicable Life Coaching and Counseling Services. His services are affordable, accessible, anonymous and available by appointment from the privacy of your own home. To avoid travel time and the comfort of home, many clients prefer to meet with Dr. Mike over the phone or via Skype. The convenience of this type of coaching is the most effective means of Life Coaching and counseling for those who live out of the Denver-metro area. Give Dr. Mike a call at 303.456.055

This entry was posted in I want to save my marriage and tagged anger, bitterness, conflict, Divorce, Dr. Mike, Dr. Mike divorce coach and counselor, hates conflict, lack of communication, unresolved conflict. Bookmark the permalink.