Dealing with difficult gossips in your life. I know we all have been involved in gossip in one shape or form either on the receiving end or being the person who gossiped. Confronting a gossip in most cases causes the person to be angry and difficult towards you. This is a universal problem in all cultures around the globe. There are gossip magazines, gossip columns in the newspapers and on TV and the internet. Have you ever confronted a gossip? It can be very embarrassing for everyone involved. I listened to a friend of mine gossip about a person he knew that was late on his rent for his business and how he didn’t treat his co-workers very well. He went into great detail of how this man was a poor businessman and wasn’t very honest with his clients. I felt a twinge of pain for the man that was being gossiped about. He wasn’t there to defend himself or explain the reasons for his actions. I think gossip has parted families, in-laws, and close friends.

If you’re the one being gossiped about, and I’m sure you have been, it’s a difficult thing to share with you. When we find out naturally, we want to defend ourselves against the person talking about us behind our backs. Confronting a gossip can be very difficult not only for you but the person you will be talking to. Most people who are being confronted about their gossiping will ignore the challenge from you and play the drama king or drama queen role. It’s embarrassing to be called on the carpet for the mistruths they are sharing with others. When someone gossips, they most likely don’t have all the facts and are going by their opinions or what they’ve heard from others. The one most common thread for gossips is that they have a way to much time on their hands. They listen to other gossips spread misinformation and take what they have heard and spread it as fact to anyone who will listen.

I had a friend who didn’t have a lot of people he hung out with or knew personally. He was overheard talking with someone at lunch and sharing his opinion about someone at school. Someone overheard him, and he seemed like a gossip magnet for several people. He felt that he an audience of classmates and that he was important to them. He made up all kinds of stories about fellow students. Some half-truths and some just fabricated lies. When people started to sit with him at lunch and listen to the gossip he spread, I knew he was going to have to face some of the people he gossiped about. That day finally happened in the lunchroom a week later. As he was talking to several people at the table, one of my football teammates walked up to him and confronted him and made a scene. The people at his table left him alone with my teammate. I watched as he made it known that he was spreading lies, and it better stop. Gossips think that they are powerful and in the know when they spread gossip. They want to feel important and think that knowing personal details makes them someone who you can trust. Here are some of my tips on what gossip will do if not kept in check:

• Gossip can ruin reputations at home, among friends, family and in the workplace.
• Most likely the gossip will spread lies, and the gossips reputation is on the line. You don’t want to be known as a gossip. People will avoid you once this label is placed on you.
• Is your gossip helpful, uplifting, encouraging, and true? Probably not!
• Gossip has a way of getting back to the person you’re talking about, remember that! 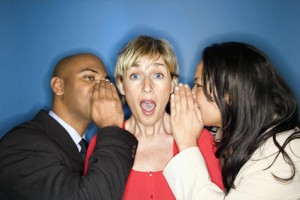 Don’t expect a gossip to say nice things about you