As I was waiting in line at a local fast food restaurant, a young man about 20 or so decided to cut in front of the line and act like he didn’t do anything wrong. He didn’t bother to look behind him at all and notice the cold stares he was receiving from the people behind him. Some of the people started to grumble and let him know that he needs to go to the end of the line and wait his turn. He kept looking at the menu not paying attention to the people who were calling him out. I was wondering why he thought he could get away with his cutting in line. I waited patiently as the line started to move as people had their orders taken. 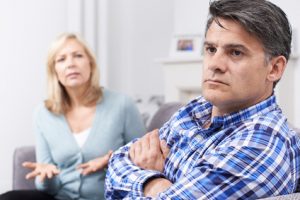 Mature Couple Having Arguement At Home

The woman he cut in front of was a senior citizen, and as he steps up to give his order, she cut in front of this young man and gave him a lecture about manners and respect. She raised her voice so everyone in Wendy’s could hear her. Then she told him to go back to the end of the line. He left the restaurant in a huff and angry. My thoughts were “Bravo” for you. Good job on her part.

So the question begs, how should we deal with difficult people in our lives? Do we confront them and let the chips fall where they may? Do we step back and say nothing and hope it doesn’t happen again? We all have degrees of what we can tolerate with difficult people. Most of us will say nothing and keep to ourselves. We avoid conflict at all costs. I know some folks who look for correcting someone’s bad behavior if it involves them or someone they know, and it often gets them into trouble.

My older brother and I were driving through the drive-through at a Burger King in Florida. He began to place his order with the attendant when she interrupted my brother and asked what size fries he wanted. He said the medium size and then she proceeded to ask him how much would that cost because he could see the prices on the menu board? He said she should know the price and then she unloaded on him on how stupid he was for not being able to read the menu. My brother asked to talk to her manager. The cashier refused to get her manager to speak to my brother. He drove up to the window where this woman was, and he asked again for the manager. She refused and said to my brothers face that he was stupid and couldn’t read. The manager overheard them arguing and came to the drive up window and asked what the problem was? My brother told her the story and the order taker listened and then verbally attacked my brother. Obviously, this was starting to get out of hand, so I asked my brother to leave and go. The manager was trying to solve an issue with her problem co-worker and getting nowhere with her. I think it’s wise to pick and choose your battles and not die on the hill for each and every encounter.

This entry was posted in I want to save my marriage, relationships and tagged anger, confront, difficult people, dr mike relationship counselor and divorce counselor, run-ins. Bookmark the permalink.