The Voice Of Hope “Lost In A Blizzard” 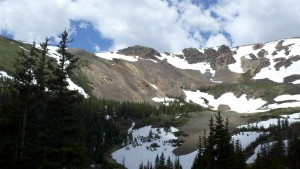 There is always hope for the hopeless

As we continue with “Lost in a Blizzard” you will see how a kid from Wisconsin was headed for danger without knowing it. The area that we wanted to hunt was the White River National Forest, near Carbondale, Colorado. Our first stop was near Denver with my best friend, George, who invited us to stay over before we headed into the high country. George told us about the dangers of hunting in the mountains, the snow, cold temperatures, and high winds. It sounded to me like he was describing Wisconsin during deer season so I told myself I could handle that with no problem! George also shared that the area we had chosen was one of the best areas to hunt elk and deer.  I knew that outdoor writer in the hunting magazine was right about his review of this area. George was had planned to hunt with us but he had to work, so he saw us off and we were on our way.

I had heard stories about the mountains and how beautiful they are. I found out for myself that morning as we drove through the canyons and over the passes.  I had never seen such breathtaking beauty as Colorado mountains.

When we arrived to the area of our hunt, I was astounded at the rock outcroppings and jagged, snowcapped peaks in the distance.  This was what the mountain men dealt with many years ago as they trapped and hunted. I had no idea what I was getting myself into. It was all new to me.

As Mark and I loaded up our packs and gear, I looked off into the distance. It was very tranquil and peaceful. The sun was still up so there was plenty of daylight left. We said our goodbyes to John as left for camped with some other guys from Wisconsin that were in the area.  So off we went. The climb was pretty tough considering we were hauling about 60 pounds of gear. We had no clue where we were going.  We didn’t even have a topographic map or compass but we did have our youthfulness! As we kept getting higher the vehicle was getting smaller each time we took a break to catch our breath.  I was using saplings to pull myself up when they were available, to keep the pace up the steep slope. We crested several hills, and finally decided to camp on the flats near some scrub oak. The views were incredible.  I could see for miles in any direction. What sticks out in my mind about the day we climbed was the fact that the temperature was in the high 60s. I was sweating profusely by the time we reached our destination. I figured that we were at 10,000 feet in elevation. Mark and I started a campfire and spent the evening watching the embers glow as the sun began to set. I was tired but, but oh so restful. I imagined what the gold miners that traversed the mountains looking for gold thought of this land the first time they camped

After we pitched the small nylon pup tent we had our first meal by the campfire which was hot dogs and pork and beans.  That probably was the best meal that I ever had while hunting. Simple, but it fit the mood and excitement for the evening. Next week we will continue with “Lost in a Blizzard.”

“No. Don’t give up hope just yet. It’s the last thing to go. When you have lost hope, you have lost everything. And when you think all is lost, when all is dire and bleak, there is always hope.”